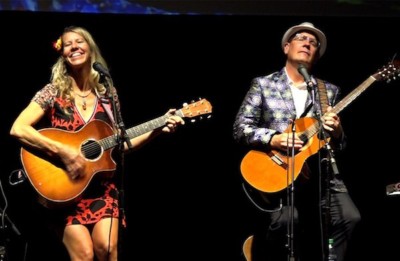 In 2018, Patchouli & Terra Guitarra went global, bringing their music all over the world by touring the UK and Europe, China, and the U.S. In 2019, their album Spirit Wheel was nominated ZMR “Best World Album.” The duo continued touring the U.S. and also returned to China for a second, and larger, tour. In the beginning of 2020, they will release their twenty-second album together.

Patchouli & Terra Guitarra have performed over 4,500 shows, toured a million miles on the road, supported twenty-two CD releases, performed on TV and in film, and are played on radio programs around the world. Their soulful fusion of blazing Spanish and world guitar instrumentals, heartstring tugging lyrics, lush vocal harmonies, and epic folk rock anthems, infused with a visible onstage chemistry, guarantees to make the night one of uplifting music that leaves you uniquely inspired and excited to pick that old guitar back up.

Mini documentary of our China tour in July at : Landscape of Guitar in China, July 2018