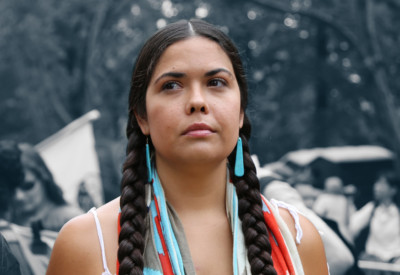 SAINT PAUL, MN (August 9, 2017) – For the first time, a grassroots sustainability festival called The Energy Fair will be coming to Saint Paul at Harriet Island Park this September 9-10, with a Solar Professional Day Sept 8. The keynote speaker lineup, just announced, will include nationally and locally recognized leaders in the clean energy and sustainability movements. Attendees will hear from Tara Houska of Honor the Earth, Michael Noble of Fresh Energy, and Jason Edens of the Rural Renewable Energy Alliance. By popular demand, the Fair will feature a full-length screening of the June 2017 keynote address by JB Straubel, Co-Founder of Tesla, from The Energy Fair in Custer, Wisconsin, as well as special screenings of two award-winning documentaries.

Tara Houska of Honor the Earth will speak on Saturday, September 9th at 6:00 p.m. Houska is Honor the Earth’s National Campaigns Director, a tribal rights attorney in Washington, DC, co-founder of NotYourMascots.org, and former Advisor of Native American Affairs to the Bernie Sanders Presidential Campaign. She advocates on behalf of tribal nations at the local and federal levels on a range of issues impacting indigenous peoples. Houska recently spent six months living and working in North Dakota fighting the Dakota Access Pipeline.

Minnesota’s own Jason Edens will also speak on Saturday (1:00 p.m). Edens is the founder and Director of Rural Renewable Energy Alliance (RREAL), a national nonprofit organization dedicated to fighting energy poverty with solar power and ensuring that solar energy is accessible to all.

There will be two screenings of the June 2017 keynote address by Tesla Co-Founder JB Straubel, Saturday and Sunday at 10:00 a.m. JB Straubel is the Chief Technical Officer (CTO) and co-founder of Tesla Motors, and he spoke at The Energy Fair in Custer, Wisconsin on June 17. At Tesla, Straubel manages the technical direction and engineering design of the Tesla products including battery technology, power electronics, motors, software, firmware and controls.

A special screening of America’s first carbon neutral film entitled Sweet Land will air September 9th at 4:00 p.m. Sweet Land is a story of unlikely immigrant lovers who struggle for integration in 1920’s America. It was locally produced in Minnesota.

Noble’s keynote will be followed by a screening of the award-winning Sundance documentary LOOK & SEE, a powerful cinematic portrait of Wendell Berry—farmer, activist, and undoubtedly one of America’s most significant living writers.

“We’re thrilled to offer a lineup of visionary speakers who are leading the transition to a clean energy system that works for all,” said Devon Cupery, Engagement Manager at the Midwest Renewable Energy Association.

The Energy Fair is hosted by the Midwest Renewable Energy Association with a goal of increasing public awareness and education about renewable energy, efficiency, and sustainability. In addition to keynote speakers and screenings, The Energy Fair will offer more than 80 workshops and 60 exhibits focused on clean energy and sustainable living topics that are open to the public and free of charge. The Fair will also include an electric and hybrid vehicle parking lot rally and Ride-N-Drive in celebration of National Drive Electric Week.  All Access Passes are available for purchase and include entry to the Solar Professional Pre-Fair Day on Sept. 8th, 20 hours of solar professional workshops, keynote speakers, film screenings, and live music. Hardcore volunteers and MREA Members will receive free All Access Passes. Workshops and exhibitors are posted at TheEnergyFair.org.

“The Energy Fair offers workshops that empower people to lead low-impact lifestyles and take collective action toward a sustainable future. From canning your own food to community solar, The Energy Fair has something for everyone! We will even have a couple solar trailers to power the event so you will be able to see sun power in action.” Allison Lindquist, Events Director, Midwest Renewable Energy Association.

The Energy Fair is organized by the Midwest Renewable Energy Association (MREA), a 501(c)(3) non-profit. For 28 years, the MREA has held The Energy Fair in Central Wisconsin, drawing an average of 13,000 attendees each year. The MREA has been a leader in energy education in the Midwest since the first Energy Fair, offering in-person and online training for solar and small wind energy installation. Since 2012, the MREA has worked with partners across the state of Minnesota to advance the solar energy market and training programs, contributing to a growing clean energy economy.

The Minnesota Energy Fair is powered by the MREA with support from Explore Minnesota and U.S. Department of Energy. The MREA was incorporated as a 501(c)3 nonprofit shortly after the first Energy Fair in 1990. MREA’s mission is to promote renewable energy, energy efficiency, and sustainable living through education and demonstration. To learn more, call 715-592-6595 or visit www.TheEnergyFair.org or www.midwestrenew.org.